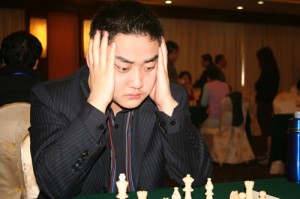 Entries have so far been received from India to Iceland and Ukraine to USA. Numbers in the Masters event have already overtaken last year’s total and entries are still coming in for all tournaments.

Leading the field in the Masters Tournament is Chinese grandmaster Wang Yue. Aged 24, Wang is the highest rated player from China to date. He reached No 11 in world rankings at his peak but is currently ranked 49th in the world. English grandmaster, David Howell, is the second highest rated entry, and he played in the prestigious London Classic at Olympia which ended last week.

India is again strongly represented with a men’s team and women’s team taking part. Last year’s event was jointly won by Indian grandmasters Sengupta Deep and A.Das. Appropriately for a Hastings event, a team from Normandy is also taking part though, on this occasion, we are very much looking forward to their arrival!

Cllr. Jeremy Birch – Leader, Hastings Borough Council will open the event and make the first move in the Masters Tournament on 28th December.

As well as the Masters Tournament there are Christmas and New Year events for more casual players running concurrently and a Weekend Tournament midway through the Congress. It is not to late to enter and entries can be taken on the first day of play.

English grandmaster, Chris Ward, will be giving a daily commentary on the leading Masters games which will also be broadcast on the congress website.

As in previous years, evening events are a part of the Congress programme. This year there will be a new addition when the World’s first FIDE-rated Blitz takes place at the White Rock Hotel on Monday 2nd January [see separate post for full details].  The familiar Pairs Competition at the Pig in Paradise is on 29th December.

Thanks go to Hastings Borough Council for their continuing generous support. Thanks also to the White Rock Hotel, the Lansdowne Hotel, Deutsch, KC Computers, Orion Energy and the Pig in Paradise.

The opening will take place at 14.05hrs on Wednesday 28th December and entry for spectators to the playing area or commentary is free and visitors are welcome.

Play in the Christmas, New Year and Weekend events begins at 09.30hrs and 14.15hrs each day and at 14.15hrs each day for the Masters Tournament. Photography/filming is permitted with lights for the first 10-15 minutes of play and without lights throughout at the arbiters’ discretion.