At the Annual General Meeting of the Hastings International Chess Congress held on 21 March 2015, Con Power stood down as Director of the event after a remarkable 32 years. He was congratulated on his long service and thanked for all he had done on behalf of the many players who played in Hastings over the years. Congress Chairman, Paul Smith, presented Con with a watch to mark his much appreciated contribution to the Chess Congress. 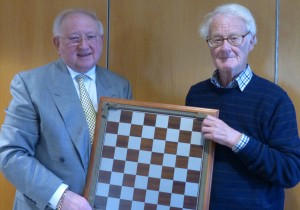 Stepping into the Director’s role is Alan Hustwayte. He has been Secretary of the Congress Committee for a number of years.   He has been a chess enthusiast over many years and is a long term resident of Hastings. He was congratulated by colleagues and is pictured here with Con Power.

Despite further funding cuts announced by the Borough Council, dates have been set for the next Hastings Congress which will take place from 28th December 2015 to 5th January 2016 and a drive to raise further funding is now underway.