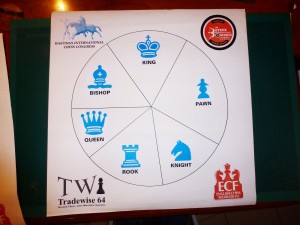 This unique sporting fixture was to celebrate two sports which are closely associated with Hastings. Archery since 1066 and Chess since 1895.

Rasa Norinkevicuite (Woman FIDE Chess Master Lithuania) and her team of four archers from Bayeux Bowmen  played against Francis Rayner (Wales) and his team of four archers, also from Bayeux Bowmen. Rasa won the toss and thus had the white pieces. Both Rasa and Francis are members of Hastings Chess Club  and will be playing in the 91st Hastings International Chess Congress from 28 December 2015 to 5 January 2016. This is the longest-running international chess congress is the world.

Each player nominated which piece he wanted to move. An archer then sought to hit the appropriate segment of the target. If the arrow landed in another of the six segments, that piece had to be moved. If the move was illegal, or the arrow  missed the target altogether(!) then the next archer in the same team shot his or her arrow. If s/he again missed, a pawn had to be moved.  Each of the four team members used a different bow and they vary considerably in accuracy. For the players part of the skill was realising how accurate the next shot of their partners and opponents would be.

Attaching question marks to some of the moves would be incorrect for our two international players. The moves were forced on them when the arrows went astray. The moves of this historic game:

Everybody was talking about when they would play again, even those archers who didn’t know how the pieces moved, nor even their names. There was much puzzlement as to why the symbol for a knight is N. We were asked, ‘Why the name rook, when it is obviously a castle?’

There were also discussions of  whether the game should be put on ChessBase. Just in case, Rasa’s team of archers was Stuart Homes, Tony Tutt, Gautam Sengupta, David Flay. Francis’s team was Colin Ford, Mark Neale Ripley, Jane Ripley and Rachel Flay. The Flay family made certain they would score one point!

You will note from the attached target, that the pawn segment was bigger than the others and the queen was smaller. This was entirely deliberate.

This was one of my zanier ideas to promote chess. But less dangerous than chessboxing. There was never a danger of an arrow striking a human target.