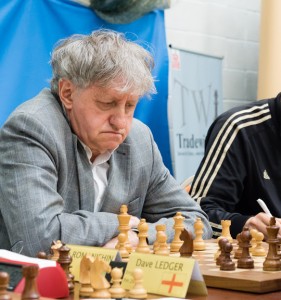 New Year’s Day dawned on a dry but rather colder Hastings as the Congress moved in to the fifth day with some exciting chess in prospect. A few travel problems meant that one or two players had to withdraw which was very unfortunate for them but, New Year’s Eve out of the way, most participants, hopefully not nursing hangovers, were ready to play at the allotted time.

The White Rock Hotel hosted a Games Evening on New Year’s Eve which proved a great success with visitors to the Congress and other hotel guests who hope can be repeated next Congress.

The five day Christmas tournaments ended on Friday and results of the Morning Tournaments can be found below the account of action in the Masters.

Round 5 saw rather less decisive games on the upper boards than in round 4, attributable to the fact that the pairings were much more evenly weighted with the higher rated players settling inexorably at the top of the table. The top board clash, GM Mista 2567 – GM Vakhidov 2546, proved dramatic with the latter claiming an advantage and Mista hanging on to preserve his 100% record or at least to ensure a share of first position. In the end Vakhidov triumphed and is now in sole lead of the tournament with Mista knocked back to joint second. Boards 2-4 saw hard fought draws with GM Berkes 2650- GM Arkell 2490 particularly intriguing. Arkell ceded the exchange for a pawn early on in return for pressure and a very unbalanced position which was always on a knife-edge. Berkes, faced with Arkell’s inventive play, was unable to make his small material advantage tell and a draw was a very fair result after a complex struggle.

Board 5 saw GM Fodor 2492, with the Black pieces, defeat IM Eggleston 2396 and the upset of the round was IM Krishna’s 2367 win over GM Hebden 2469. I say upset, but Krishna is having a good tournament whilst Hebden does not seem to be on the best of form so far.

Legendary GM, Oleg Romanishin 2462 (pictured above by Brendan O’Gorman) joins the chasing group with his win over FM Radovanovic 2321. The GM achieved a strategically won game out of the opening and was saved further work when his opponent, under considerable pressure, cracked and blundered a knight.

This is one of the busiest days during the Congress with the 35th Weekend Congress starting last night and ending on Sunday afternoon. The commentary room is well attended every day and the games on-line are being keenly watched. Tomorrow sees Round 6 of the Masters and Round 2 and 3 of the Weekend congress taking place. The Chess and Bridge Bookstall is now here and can be found in the analysis room.