The Pairs at the Pig event was well attended – 16 pairs entered which was possibly the highest ever entry.  There were also several spectators adding to the atmosphere. Simon Williams and Gary O’Grady’s games attracted quite a voluble audience, and Mark Bryant had to quieten things down on a couple of occasions, but the games were all played in the spirit of the evening. Bar trade seemed fairly brisk as the tension mounted. 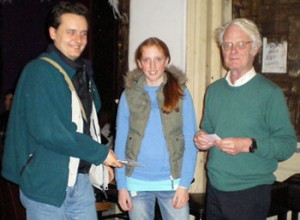 Thanks go to the Pig in Paradise who sponsor the event. Click here for a gallery of pictures